I’ve been seeing those large monkfish livers at the Union Square Greenmarket for quite a while, but I hadn’t had the chance to fit them into my dinner plans — until recently.

Monkfish is found along all the European coasts, from the Barents Sea to the Black Sea. Its rich liver can be prepared pretty much like foie gras, but has a softer texture. It is particularly praised in Japan (as other species from the same family are found all over the world), where Ankino — a steamed liver served with daikon, green onion, and ponzu sauce — is considered a delicacy.

I am using an adapted version of Thomas Keller’s recipe from Under Pressure: Cooking Sous Vide. The liver’s mild taste is a great match with trout roe, and the spring onion and garlic jam brings a note of sweetness that extends the analogy with foie gras (which is often served with sweet preparations) while keeping the “Eastern European” part of the Japanese dish (the onion). All you have to do is combine the three elements on blini or oladi. 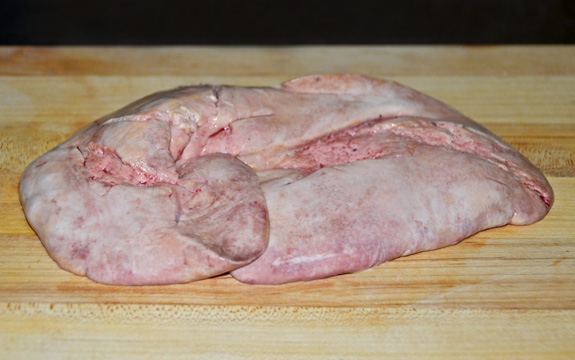 I LOVE monk-fish liver, though never trust by myself to make it – leave it up to sushi chefs..